The Chair of the Parish Council remains In Office until a successor is appointed, the Vice Chairman also continues until the new Chair is elected.

For information – a Parish Council must meet annually . In an election year this annual meeting must take places on the day when the Councillors take office or within 14 days thereafter (10 May to 23 May 2022 In addition a parish council must meet on a least three other occasions during the year. 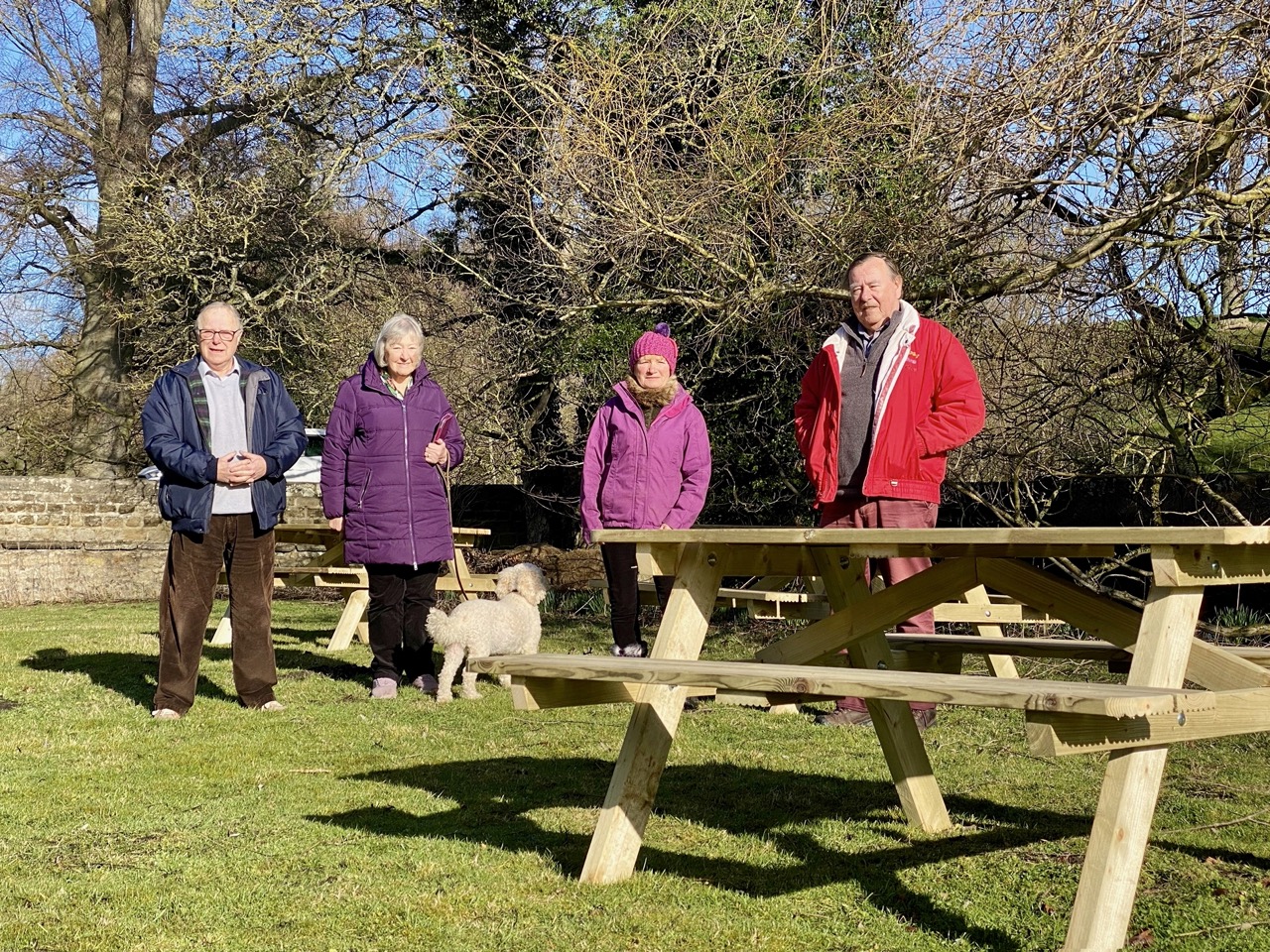 Benches for the Village Green

Three bench-tables were delivered to the Village Green on Saturday 5th March. They were donated by the Parish Council and partially funded by the Area Partnership. The benches were constructed by Peter Wright a joiner of Finghall. There to receive delivery of the benches on behalf of the community were Joan Hainsworth, Clerk to the Parish Council, Hilly Dobson, Parish Councillor, George Tomlin, Chair to the Reading Room Committee and Jeffrey Lane Committee Member and local resident. The benches will be used for picnicking by both residents and visitors alike and will greatly enhance the usage of the Village Green. They will also be of great use for community events and the forthcoming celebrations of the Queen’ Platinum Jubilee.

The Parish Clerk has contacted Highways regarding following Road Concerns.

Highways have notified the Clerk that due to the high volume of repairs etc required the above issues may take some time.

Dog Bins – we are again on the list for a dog bin at Westmoor Farm a request was made for this over year ago.

The Clerk has been informed that there is a 19 week waiting list, but the Clerk felt we had been waiting for more than 19 weeks so we should be well up the list for this installation.

Dog Bin for Constable Burton has been ordered

There were no apologies and no declaration of Interest,

Minutes of the Last Meeting were read and approved – proposed and seconded.

– two members of the public attended.

The Clerk informed the Meeting that there was no further information on the dog bins, and  lighting.

Murder Stone Plaque – the family had requested that the installation of the plaque be moved to the summer months when travelling would be easier.

Finghall Grass Verges –  these were now in an appalling state.   Vehicles parked on the side of the road in the village itself were pushing the through traffic on to the verges and as a result the verges were being chopped back there was very little the Parish Council could do.

Unitary Authority – The Chairman advised that he had been notified of Meetings in March and would know more then but Councillor would all have to submit nomination papers and be re-elected, the Chairman would collect these from Mercury House.

At this point the Chairman advised the Meeting that he would be retiring after 38 years on the Parish Council 25 years of which he had served as Chairman.

The Clerk would retire at the same time having served 20 years on the Parish Council.

This Meeting would be their last Meeting

A new Councillor would be required for Finghall and a new Clerk.  Anyone interested should contact the present Clerk for information. The Clerk informed the Meeting that training was available courses were run for Clerks etc. usually around £22.50, could possibly be more some Councils pay for this but some Clerk pay themselves, this would have to be decided.

The Clerk had received a letter regarding slurry being transported to slurry tanks on the road between Constable Burton and Hauxwell.  Highways had been advised and they had inspected the road and at the time the road condition was adequate but Highways had given the Clerk a telephone number for the complainant to contact them as and when the situation arose again. The road condition could not be  attributed to Cox Pasture Farm.

Regarding a previous Planning Application at Constable Burton Hall Councillors had spoken with the site owner and were satisfied that the application was reasonable.

The Clerk had received complaints about an unauthorised access at Akebar Camp it was felt that this was in an extremely dangerous place and requests had been made for the Planning Authority to be notified particularly as the original access had been closed.

The Clerk said this would be a  very sad day for the village.

When the Clerk moved into the village 40 years ago the Chapel was a vibrant hub and the people that have kept it going since that time and before  needed a big thank you from the Parish Council.

The Clerk informed the Meeting that the Church will not be putting notices in the Parish Notice Boards in future due to the  carbon footprint this was another sad day as tourists to the village perused the notice boards for information.  The Clerk had taken the times of the services out of  he Gateway magazine and posted them in the Notice Board for many years.  The magazine has also been discontinued.

Birds – as a villager and not as Parish Clerk – attention was drawn to the fact that the bird population has suddenly decreased in Finghall, the Meeting was advised that as many as 20 Sparrows per day were in and on the Beech Hedge outside the Clerks house and now there are just two or three the same for the Blue Tits. The Environment would be contacted to ascertain if this was a direct result of any recent  activity in the village

Other people had been consulted who had noticed the problem.

The Clerk advised Councillors of  the fact that all consultation on anything concerning the Parish Council should not be conducted by any individual Councillor this was against the rules and left the council wide open to speculation.

Date of Next Meeting – this would have to be arranged after the elections.